Video Transcribed: I would like to talk to you guys about domestic violence. And I’ve talked about it in past from the standpoint of when you’re accused of it. Today, I want to talk about handling it if you’re the victim of it. And guys, I know this is a really sensitive subject.

Statistically, we know it does happen. We know that women hit men just as much as men hit women. And although the statistics are probably not 100% reliable because guys are less likely to report it, it is a problem for us guys too. And I know this is one of those things, if you are a victim, it’s a hard thing to admit that your girlfriend or wife is beating you up. It’s even made worse by the fact that guys tend to be viewed with much more suspicion when they raise this type of thing than women, or they can be subject to ridicule.

What do you do about it? Well, from a legal standpoint, you do have the same rights as any woman who’s a victim. You can take up options like a protective order. You can ask the court to award you emergency custody of your children. And as I’ve talked about in the past, under Title 43, if you can establish that there is domestic violence going on in your relationship, that sets up a presumption that you would be favored for custody and it sets up a situation where you could ask the court to award you your attorney’s fees for the costs of prosecuting a divorce or a paternity action.

If you’re unmarried and you’re in a loving relationship where there’s abuse and you have a child with her, that does create a complication. And I say that because if you want to get your child and you haven’t yet been adjudicated the father in district court, then you have no direct rights to the child, to the custody of the child, or anything. And you’re going to have to establish that before you even get to go down the road of saying, “Hey, court, you need to give me custody because mom’s violent.” These are all things to be aware of. 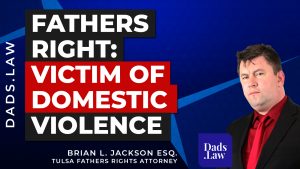 And then, you can go file for a paternity action in the district court and, in an emergency, ask for emergency custody. I can tell you in Tulsa County, the judges will ask to see acknowledgment of paternity before they will consider awarding you custody of the child. You need to get out in front of that.

Now, if you have a situation where you’re not on the birth certificate or where you don’t have those documents readily available, there is a workaround potentially, and that would be in the form of seeking out emergency guardianship of your child.

Now, there is a process for doing that and it can add a layer of complication because guardianship in Tulsa County and paternity are going to go in front of two separate judges. You may have a situation where both judges are saying, “No, the other judge needs to take action before I can do anything.” It does complicate things. However, there is relief available.

Also, if you are a victim of domestic violence, you need to be prepared to press charges. What I mean by that is if you have the opportunity to seek out assistance from the criminal authorities, and it is a crime to hit your intimate partner, that’s a crime. It’s a domestic assault and battery.

You should press charges. And if the police or the DA are being unhelpful or not willing to do it, this is a good reason to get your own lawyer and get them involved. Because the reality is, it is a crime, and just because you’re a guy doesn’t mean you deserve to get beat up. And the same things that would get a guy prosecuted in court should properly get a female prosecuted in court as well. But you may need to get legal assistance to make that point.

The last thing I’m going to tell you, if you’re in a situation where you don’t feel safe, get the hell out of it. Get out of it as quickly as you can. And definitely try to avoid a situation where you’re forced to act in self-defense and use violence back because that can complicate things immensely. You do have a legal privilege to defend yourself in Oklahoma. You do not have a duty to retreat. Oklahoma is not a duty to retreat state.

Although you should be aware that castle doctrine is not going to apply against your significant other. But you do not have a duty to retreat. But, nevertheless, pragmatism dictates that you probably want to… If you can get out of the situation safely without resorting to violence to defend yourself, that’s your best bet.

Because the reality is, if you put your hands on her and injure her, you’re probably getting arrested and you’re going to have a mess to sort out. And if you do have a child with her, it’s going to complicate matters immensely in terms of getting visitation with your child or getting custody of your child.

If you’re unmarried if you’ve not adjudicated dad, be careful about taking that child because, legally, until you’ve been adjudicated dad, you do not have rights. If you are looking for a divorce attorney for men or a men’s rights attorney in Tulsa, contact me.