Judges Can Consider Your Parenting Style

Video Transcribed: My name is Brian L. Jackson. I am a Tulsa father’s rights attorney. I’d like to talk to you guys today about a fundamental issue of law that comes up in all child custody litigation cases. This is ultimately at the core of any time you’re talking about child custody, and that is the best interest analysis.

There are certain things the judges are required to consider by statute, and substance abuse is an example of that. Also, if you have a certain type of criminal history… felonies are definitely coming in… but the court has to consider it. For example, you have a history of child abuse, you’ve been convicted of domestic violence, you have a DHS history… these are all things that are most definitely getting considered because they’re required under the statute.

Serious mental illness? That’s coming in. And they can consider that, and they will consider that. Who you date? Most judges probably won’t care if it’s someone you date who you never bring around the children. Although if you’re spending a lot of time out dating and not a lot of time with your children, that tends to look bad and that can cost you.

Judges can consider your parenting style. Some judges really have strong feelings about corporal punishment. Is it illegal? No. There’s actually a statute directly on point that says you have the legal authority and privilege to spank, paddle, or switch your child, and use other reasonable force to control your child.

But the devil’s in the details because reasonable, to some extent, is a subjective standard. What one person considers reasonable, another person may not. So yeah, that’s absolutely a consideration. Quality of education? If the child’s getting an education, the level of control you exercise over the child, vis-a-vis, the child’s age, any of those things are fair game and the court can consider it. So probably if you have to ask, “Does my habit of doing X, have a bearing on my child custody case,” the answer is yes.

Okay. I’m going to talk in more detail about some specific types of issues that are really highly relevant in some upcoming videos. But for right now, I just kind of wanted to give you guys the overview of what the courts are looking at with child custody determinations. It’s the best interest standard, and that’s a very broad standard. And the result of it is, that… yeah, almost anything is fair game, guys. So be aware of that.

I mean, I wouldn’t sweat it hard. There are a lot of things that, although they’re relevant, they’re not going to hurt you seriously. But I do think that the thing to understand about best interest is, if there’s something that you think the judge might want to consider, you probably want to tell your lawyer about it before you stand in front of the judge and have to answer questions about it, so that they can be prepared for it.

It May not matter too much, but they need to know. That’s the long and short of it. If you have questions about this issue or any other issue affecting your rights as a father, then you should go to Dads.Law and talk to me. Dads.Law fathers are not disposable. 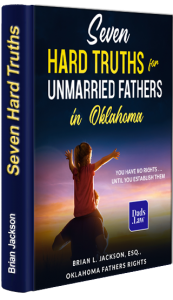 Get Your Free Copy of Seven Hard Truths for Fathers

Your message is on its way to the fathers rights attorney.

We will respond as quickly as possible, usually within the next business day. To stay informed on important fathers rights news and get practical tips about fathering in Oklahoma click here to recieve our email newsletter.

We will be in touch shortly. Meanwhile, I want to invite you to join the Oklahoma Fathers Rights Support Group on Facebook. Learn how other fathers confront challenges to their parental rights while enjoying the mutual support of Oklahoma fathers working to do what’s best for their children.

Send me your name and email address. I will contact you within the next business day.